Britt Moore’s collegiate playing career began at Elizabethtown College. Now in the coaching profession, his journey is coming full circle. Moore was named the 12th head coach in Blue Jays men’s basketball history and concluded his second season with the program in 2018-19.

Moore currently has a career-coaching record of 93-111 with a 15-33 record at Elizabethtown.

He has also pushed his players in the classroom since his arrival at Elizabethtown, helping the program achieve its first ever NABC Team Academic Excellence Award and its first NABC Honors Court Honoree in Ethan Dubois since 2010 in 2019.

Before taking the head coaching position at Elizabethtown, Moore spent six seasons as the head coach at the University of Pittsburgh-Bradford, taking his Panther teams to the Allegheny Mountain Collegiate Conference (AMCC) Tournament each season.

Pitt-Bradford averaged 13 wins per season under Moore and advanced to the AMCC semifinals in 2013 and 2016.

Moore made an immediate impact on the Panthers in 2011-12, his first season as head coach. Pitt-Bradford, which returned just 14 percent of its scoring from 2010-11, finished in the top 25 of Division III in free throw percentage and reached the AMCC quarterfinals. Two of Moore’s players received all-conference recognition.

In 2012-13, Moore led the program to its best start in more than two decades and a 13-13 overall record. The Panthers showed a knack for the dramatic, twice rallying from 19 points down to win in overtime and going 3-0 in the final week of AMCC play to snare a spot in the conference tournament.

Moore’s best season in Bradford came a year later, in 2013-14. The Panthers went 16-11 and reached the AMCC semifinals after eliminating La Roche in the quarters. His teams won 10 games or more in all six of his seasons with the Panthers and Moore totaled 78 victories overall.

Moore developed four of 1,000-point scorers in Keith Burgess, Tyler Ferguson, Evan Greening and Eric Matheson, and 11 players earned All-AMCC honors under his guidance. Pitt-Bradford was the only team in the league with two All-AMCC First Team picks (Matheson and Greening) in 2015-16. Greening also captured a spot on the D3hoops.com All-Great Lakes Region Second Team and was a member of the Allstate NABC Good Works Team.

Prior to heading west, Moore was an assistant coach at Albright College in Reading, Pennsylvania, for five seasons, including the final two as associate head coach to Rick Ferry. Moore was involved in the day-to-day operations of a program that enjoyed four winning seasons in five years. Albright went 80-48 during Moore’s time with the team, including 21-6 in 2009-10 when the Lions won the MAC Commonwealth Conference championship and qualified for the NCAA Division III Tournament.

Moore started his coaching career as an assistant at Misericordia University in Dallas, Pennsylvania, spending the 2004-05 and 2005-06 seasons with the Cougars.

Moore, originally from West Stockbridge, Massachusetts, played in 25 games for Elizabethtown as a sophomore in 2000-01. The Blue Jays went 20-6 –just the second 20-win season in team history—and finished as MAC Commonwealth Conference runners-up.

Moore eventually moved back to the Wilkes-Barre area to be closer to family, ending his playing career at King’s College, where he was a two-time letter winner from 2002-04. Moore led the MAC Freedom Conference in field goal and three-point field goal percentage as a junior in 2002-03, and led the Monarchs to consecutive postseason appearances in 2002-03 and 2003-04. He was also a member of the MAC’s All-Academic team.

Moore graduated from King's College in 2004 with a bachelor's degree in communications and earned his master's degree in sport management from Drexel University in 2010.

Moore and wife, Kristy, have two children, Katie and Ellis. 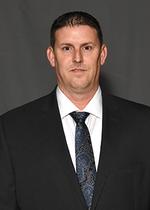 Jim Shipper enters his fourth season as an assistant coach with the Blue Jay men's basketball team in 2019-20.

Shipper brought more than a decade of scholastic coaching experience to the program when he joined retired coach Bob Schlosser's staff prior to the 2016-17 season.

In three seasons at Pequea Valley High School from 2013-16, Shipper's teams won a combined 21 games with third-place finishes in Section Four of the Lancaster-Lebanon League each of the last two years.

Shipper won a pair of Commonwealth Christian Athletic Conference (CCAC) championships and five division championships during stops at Lancaster County Christian and Living Word Academy. His teams appeared in the District 3 tournament nine times. Shipper was the head coach at Harrisburg Christian from 2003-06.

The Middletown native has collected more than 160 victories during his scholastic coaching career. Shipper and Schlosser have a professional relationship spawned through Shipper working at Schlosser's coaching camps.

Shipper has worked college numerous college games and conducted overseas clinics in Latvia, Nigeria and Spain. In addition to his work as an assistant coach with the Blue Jays, Shipper is the basketball coordinator at Spooky Nook Sports in Manheim.

Former Blue Jay Joe Schwalm returns to his alma mater in 2017-18 as an assistant coach on Britt Moore's inaugural staff.

Schwalm played in 67 games and made 62 starts while averaging 9.3 points, 3.4 rebounds and 1.3 assists per game over the course of his three-year varsity career with the Blue and Gray from 2011-14.

Schwalm's best season in an Elizabethtown uniform came as a sophomore in 2011-12, when he started 21 games, putting up better than 12 points and four rebounds per contest. He also made a career-high 39 3-point field goals that season.

A native of Halifax, Pennsylvania, Schwalm finished with 108 career 3-pointers and was a 33.6 percent shooter from downtown. He made nearly 40 percent of his field goals overall.

Schwalm, who scored a single game career-high 25 points at Widener on Nov. 28, 2012, received his bachelor's degree in business administration from Elizabethtown College in 2014.